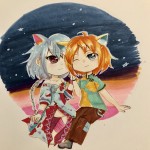 Livre barely scratches the surface of one ot the tall bookshelves when she see something strange from the corner of her eye which catches her attention, at first she thought it was just a bat flying aimlessly though the library, but upon closer inspection  she was shocked to learn that it was a flying book with a pair of wings! she was watching it fly form bookshelf to bookshelf when suddenly a book it passed  flew off the shelf and started to fly with it, another book did the same and so did yet another! until there were four unique books flying with the first book.

Livre being as curious as ever wondered what douments or ancient studies were written into these flying books, after watching them for a while longer abd taking note of there elegant flight patterns she finally made the decision to try and catch the first book.

At first she tried to chase it into a corner and catch it with her little beanling arms, which failed several time due to it completely  ignoring her presence and just teleporting away when she got too close, that was until Livre started to use her magic to set up traps for capturing the pesky winged book, which appears to be having some success at last! 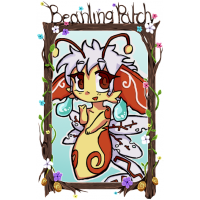