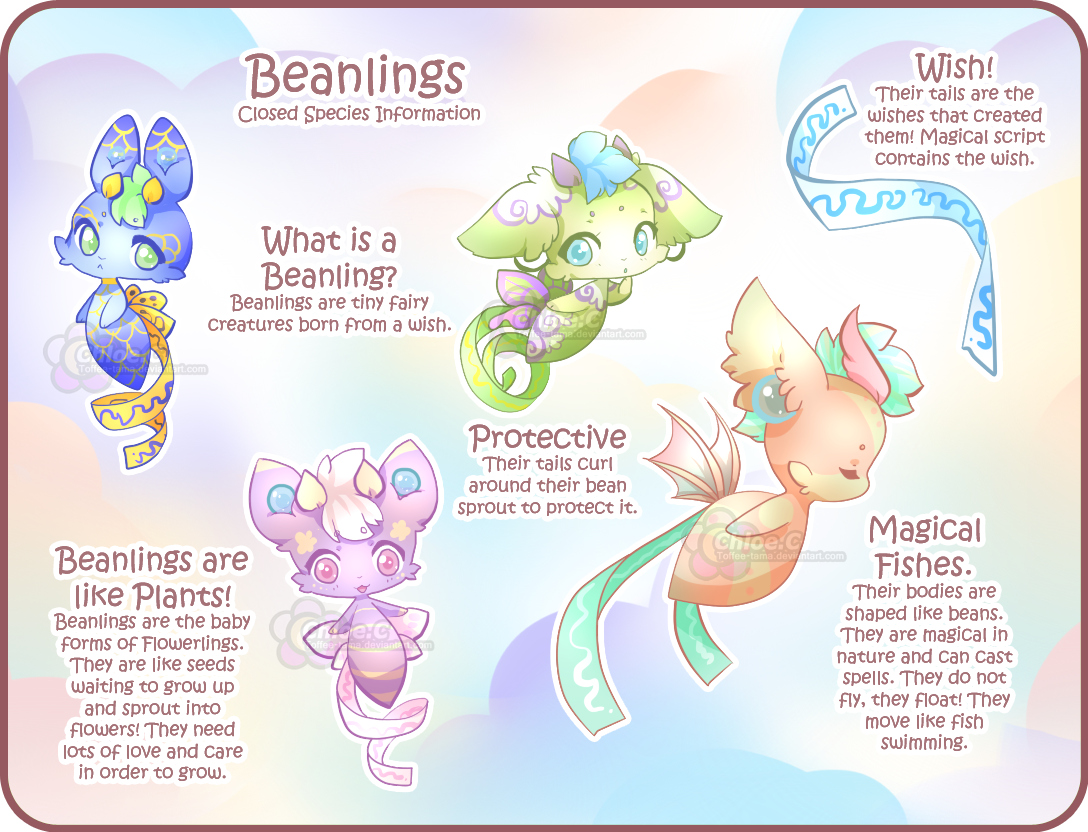 What is a beanling?
Beanlings are a type of fairy creature that is born from a wish. The wish manifests as a ribbon infused with magical script (the wish) and forms a bean sprout. The bean sprout then sprouts a head, stumpy arms, ears, feelers, hair and wings. A dew drop is their caught in the ear and awakens the beanling. They are typically born inside flowers though they can occasionally spawn out of the thin air if the wish is strong enough. Their features are usually small and their hair is short.
The wish tends to curl up around the bean sprout body in order to protect it as beanlings are very soft and squishy. They do not fly, they float! Their wings are purely visual though they do help keep the beanling stable. Their movement also resembles that of a fish, they swim through the air!
Beanlings are innately magical beings. They can cast spells and use all kinds of magic.

What is a Flowerling?
Flowerlings are the grown up versions of beanlings. They grow up when their wish has come true. Their wish tail will infuse with magic and the script will light up before passing into the bean sprout body. The magic will react and the beanling will double in size, their hair and features will grow out and a flower-like appendage will sprout from the tip of their body.
Flowerlings do not have a gender, they can present however they please at will. Their hair is also adjustable at will, however their other features are not once they have grown out.

What is a Spiderling?
Spiderlings are arachnid-like creatures. They come in a variety of shapes, colours and sizes and can be found all over Prism Vale, though they are most commonly encountered in the mysterious caverns of the Giant Canyon of Azul Island. Spiderlings are not inherently evil or malicious creatures as some young beanlings would expect. They are mostly neutral beings that live in the more secluded areas of Prism Vale, they are generally shy creatures, usually opting to hide when spotted. Their reputation for being evil comes from the fact that a lot of their kind has been infected with the Corruption that broke out on Azul Island.

They eyes are a useful ingredient in many potions, particularly potions that cause changes. It is not recommend to take a spiderling as a familiar if you are an adventurer as they have an increased risk of being corrupted or killed for their eyes.

Signs of Corruption
Spiderlings are somewhat weak-minded which is why they easily become infected by the Corruption. The infection causes the spiderlings to become highly aggressive, which is why so many adventurers report being attacked by them in the Giant Canyon. Common signs of infection include strange markings (typically in the form of corrupted runes/writing) and red glints or glowing red eyes.

*Spiderlings are not a playable species in the game, but can be used as companions*